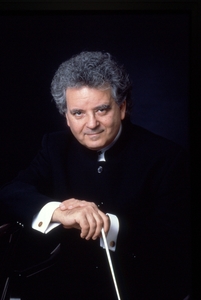 “… under Segal’s baton, it was by far the most enthralling part of the concert [Lutoslawski: Concerto for Orchestra]. In fact, it was a more exciting and edifying performance than any recording with which I’m familiar, even Lutoslawski’s own.”

Born in Jerusalem, Uriel Segal has enjoyed a distinguished international career. Founder and currently Laureate Conductor of the Century Orchestra Osaka in Japan, Mr. Segal is well known in the U.S., having held music directorships with the Louisville Orchestra (1996-2004) and the Chautauqua Festival (1989-2007). Principal Conductor of both the Philharmonia Hungarica and Bournemouth Symphony, he has also served as Music Director of the Israel Chamber Orchestra, and Principal Guest Conductor of the Stuttgart RadioOrchestra (1972-1987).

In 1973, Uriel Segal made his operatic debut conducting The Flying Dutchman at Santa Fe, and has since conducted opera in France, Germany, Italy, Japan, Israel, and the U.S. In February 2009, he conducted the Japanese premiere of Ligeti’s opera Le Grand Macabre in Tokyo with the Tokyo Chamber Opera Theatre, and debuted in the Republic of Korea with the Bussan Philharmonic. Other recent highlights have been Mahler’s Das Klagende Lied (Israeli Premiere), Dvorák’s Stabat Mater, Stravinsky’s Le Sacre du Printemps (Stravinsky Anniversary), Mahler’s Symphony No.4 and Israeli composer Mordechai Seter’s revered oratorio Tikkun Hatzot (Midnight Vigil). Most recently, he has conducted performances of The Magic Flute at the Music Fest Perugia, Italy.