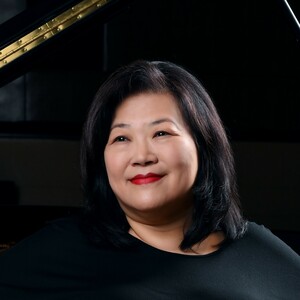 “Angela Cheng is quite simply one of the best Mozart concerto players around: her sound is invariably transparent and marked by delicacy of feeling. That it always carries, even in a large hall like the Orpheum, is a bit of inexplicable magic.”.

Consistently praised for her brilliant technique, tonal beauty, and superb musicianship, Canadian pianist Angela Cheng is one of her country’s national treasures. In addition to regular guest appearances with virtually every orchestra in Canada, she has performed with the symphonies of Saint Louis, Houston, Indianapolis, Colorado, Utah, San Diego and Jacksonville, as well as the philharmonic orchestras of Buffalo, Louisiana, Rhode Island, London, Israel and Minas Gerais in Brazil.

Angela Cheng has performed recitals and concertos at Carnegie Hall, Kennedy Center/Washington, D.C., the 92nd Street Y/New York and Wigmore Hall in London. As a member of the Zukerman Trio and Chamber Players, she has also appeared at the Musikverein/Vienna, the Concertgebouw/Amsterdam, Teatro Colon/Buenos Aires, Mariinsky Concert Hall/St. Petersburg and the Sydney Opera House. Festival appearances include Verbier, Edinburgh, Miyazaki, Stars of the White Nights/St. Petersburg and the George Enescu Festival in Romania.

Angela Cheng has been Gold Medalist of the Arthur Rubinstein International Piano Masters Competition, as well as the first Canadian to win the prestigious Montreal International Piano Competition. Other awards include the Canada Council’s coveted Career Development Grant and the Medal of Excellence for outstanding interpretations of Mozart from the Mozarteum in Salzburg, Austria.

A native of Hong Kong, Ms. Cheng studied extensively with Menahem Pressler at Indiana University and with Sascha Gorodnitzki at The Juilliard School. She is currently on the artist faculty of the Oberlin Conservatory of Music, where she was honored with the 2011-12 Excellence in Teaching Award.