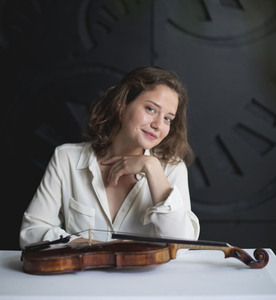 "Her performance of Hindemith's Viola Sonata - one of the most important pieces in the instrument's solo repertoire - is as insightful and subtly nuanced as any of the best available examples in the catalogue."

Winner of numerous competitions and developing an outstanding career, Dana Zemtsov is one of the most promising international viola soloists of her generation. Recent highlights include: the Bartók Viola Concerto in Tallinn; two concerts of the Mozart Duo Concertante in the Main Hall of the Concertgebouw (Amsterdam) with the Dutch Philharmonic Orchestra; chamber music with Janine Jansen and Martin Frost during the Utrecht Chamber Music Festival; as well as a recital at Carnegie Hall in New York. In 2016, Ms. Zemtsov was invited to join the 43rd International Viola Congress as a Guest of Honor, together with renown violists such as Ettore Causa, Bruno Giuranna, and Tabea Zimmerman. In 2012, she signed an exclusive recording deal with Channel Classics Records for three CDs: Enigma, Romantic Metamorphoses, and Essentia. Her first orchestral recording with the Estonian National Symphony Orchestra under the baton of Daniel Raiskin has been received successfully by international press.

Dana Zemtsov is First Prize Laureate of several competitions in Luxembourg, Italy, Austria, Germany, Portugal, and the Netherlands. In 2010, she won the Dutch competition "Evening of the Young Musician;" became the "Young Musician of the Year;" and also represented The Netherlands at the “Eurovision Young Musicians Competition” in Vienna. Ms. Zemtsov is regularly appearing on the most important international stages, including the Royal Concertgebouw (Amsterdam), Tivoli Vredenburg (Utrecht), St. Petersburg Philharmonic Hall, Carnegie Hall, and Schloss Elmau (Germany). She has played chamber music with Janine Jansen, Itzhak Perlman, Pieter Wispelwey, Martin Frost, and pianist Anna Fedorova.

As a soloist, Ms. Zemtsov has performed with the Dutch Philharmonic Orchestra, Sinfonia Rotterdam, Lake Forest (Illinois) Symphony Orchestra, Stuttgarter Philharmoniker, Bergische Symphoniker, St. Michael String Orchestra, F. Busoni Chamber Orchestra, Arnhem Philharmonic (Netherlands) and the Estonian National Symphony Orchestra. She has worked with such conductors as Conradvan Alphen, Daniel Raiskin, Fabio Mechetti, Otto Tausk, and Leif Segerstam. International tours have brought her to Finland, Denmark, Germany, Mexico, Peru, and the United States. She participated in the “Stars of Tomorrow” tour in Germany, together with the most promising young talents of Europe.

Dana Zemtsov was born in 1992 in Mexico City. At the age of 5, she received her first music lessons from her grandmother and her parents, both viola players (Mikhail Zemtsov and Julia Dinerstein). She has played under the tutelage of renowned professors such as Bruno Giuranna, Atar Arad, Sven Arne Tepl, and is currently studying with the famous viola virtuoso Michael Kugel.