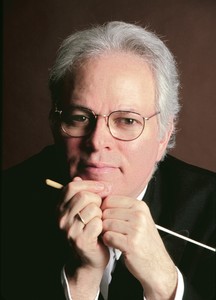 "... Smirnoff had a very distinct and particular conception of this work [Schubert Symphony No. 9]. His tempos were on the fast side during the first two movements to create momentum. He kept the spring coiled much of the the time, storing energy with quiet dynamic levels that did not diminish the inner fierceness of the music. In passages where the full impact of the orchestra was unleashed the impact felt ferocious. He made larger designs intelligible to the audience."

Conductor, violinist and eminent pedagogue, Joel Smirnoff served as President of the Cleveland Institute of Music from 2008 until 2016, holding the Mary Elizabeth Callahan President’s Chair. Encouraged by Seiji Ozawa to “take up the baton,” Mr. Smirnoff has developed into a highly acclaimed conductor with an impressive and wide-ranging repertoire. He is consistently cited for his high energy and special attention to the stylistic demands of each work.

Former member of the Juilliard String Quartet, Joel Smirnoff was featured violin soloist in 1997 at the Tanglewood Music Festival in a concert dedicated to the memory of violinist Louis Krasner, performing the Berg Violin Concerto under the direction of Bernard Haitink. In 1983, as second-prize winner of the International American Music Competition for Violin, he was awarded debuts at Carnegie Hall on its Emerging Artists series and at Town Hall on its Midtown Masters series.

As a music educator, Joel Smirnoff has been a member of the chamber music faculty of The Juilliard School since 1986, and the violin faculty since 1989, serving as its chair from 1992-2008. He was conducting assistant to Maestro Seiji Ozawa and Head of String Studies at the Tanglewood Music Center from 1995-2000.