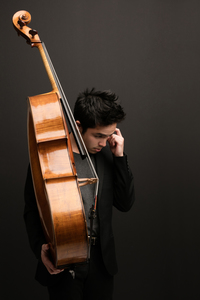 "... Jay Campbell's playing is so present, so confident and expressive, that he knows how to effortlessly assert himself against the excited nagging of the orchestra. In the encore, Ravel's duo for violin and cello, he also electrified violinist Andrea Obisio with his tremendous energy."

Praised by The New York Times for his “electrifying performances” which “conveyed every nuance,” American cellist Jay Campbell has already forged a reputation as a spellbinding artist. Armed with a diverse spectrum of repertoire and eclectic musical interests, he has been recognized for approaching both old and new works with the same probing curiosity and emotional commitment. Having collaborated with musicians ranging from Elliott Carter, Pierre Boulez, David Lang, and John Zorn to members of Radiohead and Einstürzende Neubauten. Mr. Campbell holds the distinction of being the only artist ever to receive two Avery Fisher Career Grants — in 2016 as a soloist and again in 2019 as a member of the JACK Quartet.

Upcoming highlights include a return to San Francisco Performances in a collaborative concert with pianist/composer Timo Andres and violinist Jennifer Koh, as well as La Jolla's SummerFest and the Los Angeles Philharmonic's Green Umbrella series – previously Jay was co-curator of a Green Umbrella concert with composer John Adams.  He will also perform the world premieres of Andreia Pinto Correia's new cello concerto with the Gulbenkian Orchestra in Lisbon, Portugal, and the São Paulo State Symphony Orchestra in Brazil. Recent highlights include a highly acclaimed U.S. tour with Swiss violinist Patricia Kopatchinskaja, which traveled to major venus such as the Kennedy Center, Boston's Celebrity Series, and San Francisco Performances, the Italian premiere of Luca Francesconi's concerto Das Ding singt with Musica Milano, and a performance of Brahms' Double Concerto with the Seattle Symphony and violinist Pablo Rus Broseta.

In 2017, Jay Campbell was named artiste étoile (artist-in-residence) of the Lucerne Festival, the youngest artist ever to have achieved that distinction. While there, he had roles in both programming and performing. The year prior saw his highly successful “debut” as artistic director of Ligeti Forward for the New York Philharmonic’s 2016 BIENNIAL; the success of this project underscored his outstanding contributions as both curator and performer. Working closely with Alan Gilbert, he created a three-concert series exploring Hungarian composer György Ligeti as a major fountainhead of modern music; these programs spotlighted the well-known piano, violin, and cello concertos, along with works by Ligeti’s students. In addition to putting his exceptional musical knowledge to work, he was also a featured soloist on the second program performing Ligeti’s Cello Concerto (1966).

Other highlights include Jay Campbell's Berlin debut at the Berlin Philharmonie with the Deutsches Symphonie-Orchester Berlin, and his New York Philharmonic debut performing Tan Dun’s “Silk Road Encounters” from Crouching Tiger Concerto at Avery Fisher Hall. Among the conductors with whom he has collaborated are the late Pierre Boulez, Ludovic Morlot, Matthias Pintscher, Michael Morgan, Jeffrey Milarsky, Joshua Weilerstein, Ryan McAdams, and Ludovic Morlot. He has had the privilege of working with leading new music groups, including ICE (International Contemporary Ensemble), Ensemble InterContemporain, Da Capo Chamber Players, and the Argento Ensemble.

Mr. Campbell has premiered nearly one hundred works to date, including concerti by Chris Rogerson and Pulitzer Prize winning composer, David Lang. At the 2017 Lucerne Festival, he performed the Swiss premiere of Michael Van der Aa’s multimedia cello concerto Up-close, as well as the world premiere of Luca Francesconi’s Das Ding Singt (commissioned for him by the Lucerne Festival), conducted by Matthias Pintscher. During the 2015/2016 season, he premiered a new cello concerto entitled Genus and Species, written for him by American composer David Fulmer, and co-commissioned by the Human Rights Foundation.

Mr. Campbell’s close association with John Zorn led to the release of the album Hen to Pan featuring a collection of new compositions written for him by Zorn, and released in February 2015; it was cited by The New York Times in its “Best Classical Music Recordings of 2015.” The Seattle Symphony released two recordings featuring Mr. Campbell, both with the orchestra’s music director, Ludovic Morlot. The first, in 2018, featured George Perle’s cello concerto (Bridge), and the second, in 2019, included a recording of Marc-André Dalbavie's cello concerto (Seattle Symphony Media). Upcoming releases include a disc with works of Beethoven, Debussy, Stravinsky and Pintscher (Victor Elmaleh Collection), and a collection of works commissioned for Campbell by David Fulmer (Tzadik).

As a chamber musician, Mr. Campbell is a member of the JACK Quartet, and the Junction Trio with violinist Stefan Jackiw and pianist Conrad Tao. Other collaborators include members of the Arditti, Takács, Kronos, and Afiara String Quartets. He has been invited to the Marlboro and Music@Menlo Festivals, and has enjoyed residencies at Vermont’s Yellow Barn Music Festival and at the Nasher Sculpture Center in Texas. Other guest appearances include the Spoleto, Ojai, Moab, Chamber Music Northwest, Heidelberger Frühling/Germany, DITTO/Korea, Rockport Chamber Music, and Lincoln Center festivals.  He has served on the faculty at Vassar College and the Banff Centre.

Recipient of awards from the BMI and ASCAP foundations, Jay Campbell was also First Prize winner of the 2012 Concert Artist Guild auditions, and Second Prize winner of the 2015 Walter W. Naumburg International Cello Competition, competing against more than a hundred cellists worldwide. Born in Berkeley, California, he began playing the cello at the age of eight at the Crowden School in Berkeley. He holds an Artist Diploma, as well as bachelor’s and master’s degrees from The Juilliard School where he was a student of Fred Sherry.

Mr. Campbell plays on a cello crafted in the 1750s by Italian luthier Paolo Antonio Testore of Milan.