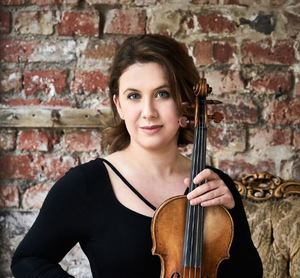 "The excitement built through the last movement.  This is a whirl of a piece and Hanslip was dazzling in the subtleties — the flashes of light and shadow, the lightning-fast triplets. There was tremendous excitement ... Hanslip wrapped up the piece with dash, and the full house thundered to its feet, applauding." [Tchaikovsky Violin Concerto]

British violinist Chloë Hanslip has securely established herself on the international stage. Since her BBC Proms debut in 2002, she has performed regularly in major venues throughout the UK, Europe, the United States, and the Far East. With a special affinity for contemporary repertoire, she plays the concertos of John Adams, Benjamin Britten, John Corigliano, Peter Maxwell Davies, Philip Glass, Huw Watkins, Michael Nyman, and Brett Dean’s The Lost Art of Letter Writing.

Highlights of the 2020-21 season include concerto performances with the London Philharmonic Orchestra, Gävle Symphony Orchestra and The Hallé.  She will be Artist in Residence at the Hertfordshire Music Festival and alongside regular duo partner Danny Driver will pay homage to Beethoven at both the Lammermuir and Lichfield Festivals.

In North America, Ms. Hanslip has appeared with the philharmonic orchestras of Buffalo, Oklahoma City, and Reno, the Sarasota Orchestra, and the symphonies of Alabama, Cincinnati, Detroit, Edmonton, Eugene, Houston, Jacksonville, New Jersey, Phoenix, and Virginia.

Active as a recording artist, Chloë Hanslip has received outstanding reviews for her two Naxos CDs: the John Adams Violin Concerto with the Royal Philharmonic Orchestra under Leonard Slatkin (2006), and the Violin Concertos of Benjamin Godard with the Slovak State Philharmonic under Kirk Trevor (2008). Two earlier CDs with the London Symphony Orchestra for Warner Classics won her, respectively, the German ECHO Classic Award for Best Newcomer (2002), and Young British Classical Performer at the Classical BRITS (2003). Her recording catalogue continues to grow with a highly acclaimed recital disc of works by Bazzini (2007), as well as the Hubay Violin Concertos with the Bournemouth Symphony Orchestra (2008). Ms. Hanslip’s first release on the Hyperion label featured the Vieuxtemps violin concertos with the Royal Flemish Philharmonic under Martyn Brabbins (2012). Three other recordings were released the following year: Glazunov and Schoeck Concertos with the Lugano Symphony Orchestra under Alexander Vedernikov; Medtner Sonatas with pianist Igor Tchetuev; and York Bowen – The complete works for violin and piano with pianist Danny Driver, which received recommendations from Gramophone (Choice) and The Strad. For Rubicon Classics, her first release is one of a three-disc series featuring the complete Beethoven Violin Sonatas, also with pianist Danny Driver. They are scheduled to complete the series this season at Turner Sims Concert Hall.

A committed chamber musician, Ms. Hanslip is a regular participant at music festivals across Europe, including Båstad/Sweden, Kuhmo/Finland, Kutná Hora/Czech Republic, and West Cork/Ireland. In 2012/13, she was curator of the Leeds International Chamber Season where she devised a series of programs around American music. Ms. Hanslip is also an active recitalist both in the United States and the UK, performing regularly with recital partners including Danny Driver, Angela Hewitt, Charles Owen, Igor Tchetuev, and Ashley Wass.