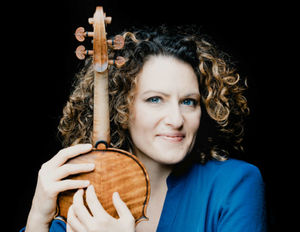 Dutch violinist Liza Ferschtman is renowned for her passionate performances, superlative musicianship, and imaginative programming. Following her sensational performance with the Budapest Festival Orchestra at Avery Fisher Hall in 2013, she made her U.S. orchestral debut in 2015 with the Dallas Symphony and Jaap van Zweden, playing the Bernstein Serenade, the same work that inspired the New York Times reviewer to write “… with Dutch violinist Liza Ferschtman bringing refined beauty and character to the solo part of the Bernstein … the concert was nothing short of revelatory.”  During the following season, she debuted with the San Francisco Symphony, playing the Beethoven Violin Concerto, with Edwin Outwater conducting.

As part of this year's Brussels Philharmonic season, Leonard Bernstein: 100 Years of Magic, Ms. Ferschtman performed the Serenade under the baton of Stéphane Denève. Her extensive international career includes performances with virtually every orchestra in The Netherlands, including numerous appearances with the Royal Concertgebouw Orchestra in Amsterdam, and the Rotterdam Philharmonic. Recent concert highlights include performances of the complete solo works by Bach at the Muziekgebouw in Amsterdam, as well as playing and conducting the Beethoven Concerto at the Concertgebouw with the Netherlands Chamber Orchestra. During the 2018/2019 season, Ms. Ferschtman will perform with the Netherlands Radio Philharmonic under Dima Slobodeniouk and will also make her debut in Norway with the Stavanger Symphony Orchestra. Other international engagements have included the philharmonics of Bergen, Bremen, Essen, Hong Kong, London, Malaysia, and Warsaw, as well as the BBC National Orchestra of Wales, Malmö Symphony, Orchestre National de Belgique/Brussels, Philharmonic Orchestra of Minas Gerais/Brazil, Nuremberg Symphony, Radio Symphony Orchestra of Prague, Schleswig-Holstein Festival Orchestra, Staatskapelle Weimar, Symphony Orchestra of Flanders, and the Yomiuri Nippon Orchestra.

An avid chamber musician and recitalist, Liza Ferschtman concertizes regularly with Jonathan Biss, Nobuko Imai, Elisabeth Leonskaja, Christian Poltera, Lars Anders Tomter, István Várdai, and Alisa Weilerstein; she counts among her duo partners, pianists Enrico Pace and Inon Barnatan. She has performed at venues such as Alice Tully Hall/New York, the Library of Congress/Washington, Wigmore Hall/London, Musikverein/Vienna, Liederhalle/Stuttgart, and Beethoven Haus in Bonn. This past season, she returned to Wigmore Hall with pianist Roman Rabinovich, with whom she collaborated in the Chamber Music San Francisco series. During the current season, they will perform at the Amsterdam Concertgebouw, Baden-Baden, and Bayerischer Rundfunk. Other recital collaborations include trios with Elisabeth Leonskaja and István Várdai in Spain, with subsequent performances at Wigmore Hall and the Musikverein. Since 2007, Ms. Ferschtman has been the Artistic Director of the Delft Chamber Music Festival. During her tenure, the festival has become widely renowned for its adventurous programming and dynamic performances by artists from around the globe.

Ms. Ferschtman's recording of the Beethoven Concerto and Romances was reviewed with great critical acclaim, as were other recordings with concertos by Dvorák and Röntgen, solo works by Bach and Ysaÿe, and duo works by Beethoven and Schubert. Her most recent albums for Challenge Classics include works for solo violin by Bach, Biber, Bartók and Berio; an all-Mendelssohn CD of the Violin Concerto and the Octet for Strings; and “Korngold • Bernstein,” a CD of the Korngold Violin Concerto with the Prague Symphony Orchestra, Kiri Malát, conductor, and the Bernstein Serenade after Plato's 'Symposium'  with Het Gelders Orkest, Christian Vásquez, conductor.

The daughter of Russian musicians, Liza Ferschtman began playing the violin at the age of five. One of her earliest important influences was a close family friend, violinist Philipp Hirschhorn. She received her formal training at the Amsterdam Conservatory with Herman Krebbers, at the Curtis Institute of Music in Philadelphia with Ida Kavafian, and with David Takeno in London. In 2006, she received the Dutch Music Prize, the highest accolade awarded to a musician in The Netherlands.