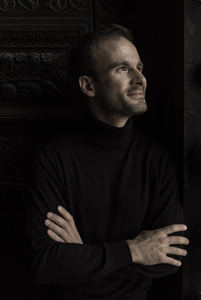 "[Kulenovic] cuts a fine figure on the podium, trim and confident, precise, even elegant in his style. But his precision gave way to passion in this multi-layered music [Stravinsky: Firebird], with its delicate opening, tempestuous flourishes and its powerful central theme ..."

Recognized as “a conductor with uncommon talent” and honored as “Chicagoan of the Year in Classical Music” by the Chicago Tribune, Vladimir Kulenovic has emerged as one of the finest conductors of his generation.  Winner of the Sir Georg Solti Foundation's highest conducting award, “Solti Conducting Fellow," Mr. Kulenovic continues to attract attention from prominent orchestras around the world.

Engagements in the U.S. include the symphony orchestras of Chicago, San Francisco, Houston, Indianapolis, Utah, Jacksonville, Omaha, Alabama, Illinois, Columbus, Grand Rapids, the Florida Orchestra, the Louisville Orchestra, and the philharmonic orchestras of Naples and Oklahoma City. Festival appearances include Aspen, Cabrillo/CA and Round Top/TX.

Vladimir Kulenovic has held permanent positions as Music Director of the Lake Forest Symphony (greater Chicago area), where his leadership achieved unprecedented growth. This was reflected in the increased level of artistic excellence, new concert formats, budget expansion, increased audience participation, and critical acclaim that included "Orchestra of the Year" and "Conductor of the Year" awards by the Illinois Arts Council. Under the leadership of Mr. Kulenovic, the LFS made their first commercial CD recordings and received a GRAMMY nomination in 2018. As Associate Conductor of the Utah Symphony and Utah Opera, he conducted over 500 performances, including Masterworks, Pops, Family, Holiday, Education, operatic, and Deer Valley Festival summer performances. Other previous positions include Resident Conductor of the Belgrade Philharmonic and Principal Conductor of the Kyoto International Summer Festival in Japan.

In 2013, Mr. Kulenovic was one of six young conductors chosen by the League of American Orchestras for the Bruno Walter National Conducting Preview. Other prizes and awards include the Mendelssohn-Bartholdy Fellowship at the Leipzig Gewandhaus Orchester (where he assisted the late Kurt Masur), Solti Foundation Career Assistance Grants (from 2011-2014), the Bruno Walter Memorial Award and Charles Schiff Award for Excellence (Juilliard, 2011), and the Second Grand Prix at the Rubinstein International Piano Competition in Paris.