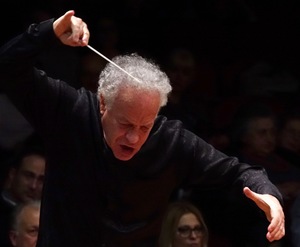 "Guest conductor Yoav Talmi led the orchestra with assurance, without score for all three works, with forthright phrasing and adamant closing gestures...Talmi demanded full voice as the work came to its exciting, succinct conclusion [Brahms: Serenade No. 1]."

Also, a seasoned recording artist, Yoav Talmi has collaborated with Chandos, Decca, EMI, Naxos, Teldec, CBC Records (Toronto), Analekta and Atma Classique (Montreal). His recording of Bruckner’s Ninth Symphony with the Oslo Philharmonic won the prestigious “Grand Prix du Disque” in Paris. His last two recordings with the Quebec Symphony of Debussy and Bach orchestrations won the Joker Prize by the Magazine Crescendo in Brussels. His recording of Schoenberg and Tchaikovsky with the Israel Chamber Orchestra for Teldec was chosen as “Record of the Month” by Germany’s Fono-Forum magazine. The London Penguin Guide gave this same recording its highest rating. His recording French Showpieces, with the Quebec Symphony and violinist James Ehnes, was chosen “Record of the Month” by the French media magazine Repertoire, which gave this recording a perfect rating. Mr. Talmi’s Naxos recordings with the San Diego Symphony feature an all-Berlioz cycle that includes the complete overtures, Symphonie fantastique, Roméo et Juliette, Harold in Italy, Rêverie et Caprice, excerpts from Les Troyens, and more. He has also recorded as a pianist, accompanying his wife, flutist Er’ella Talmi.

In 2008, Yoav Talmi was awarded the Frank Pelleg Prize of the Israeli Cultural Ministry, for his high level of artistic achievement through many years of activity; in 2013, he received the Israeli Prime Minister’s Prize for Composers. Named “Officer of the National Order of Quebec” in 2009, he was also awarded the “Quebec City Medal,” honoring his special contribution to the city’s 400th Anniversary celebrations.

Born in Israel, Mr. Talmi is a graduate of the Rubin Academy of Music in Tel Aviv and The Juilliard School in New York, where he earned degrees in both composition and conducting. A recipient of the Koussevitzky Memorial Conducting Prize at the Tanglewood Music Festival in 1969, he also holds an Honorary Doctorate from Laval University in Quebec.