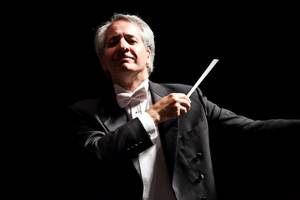 “Under the baton of former Music Director Fabio Mechetti, a program of well-loved French repertoire comforted and entertained, feeling effortless and charming. Mechetti displayed an intimate knowledge of the score, conducting the program entirely from memory, and radiated easy confidence in his communication with the orchestra he helped build.”

Internationally acclaimed conductor Fabio Mechetti currently serves as Music Director and Principal Conductor of the Minas Gerais Philharmonic in Belo Horizonte, Brazil, a post he has held since 2008. In 2015, his outstanding leadership of that orchestra was recognized with the Minas Gerais Prize for Economic Development, applauding the exceptional expansion and vitality of the organization during his tenure. Previous directorships include the Syracuse Symphony; the Malaysian Philharmonic in Kuala Lumpur; the Spokane Symphony, where he was named Music Director Laureate; and the Jacksonville Symphony, where he is now Music Director Emeritus.

In addition to his Carnegie Hall orchestral debut with the New Jersey Symphony, Mr. Mechetti has appeared as guest conductor with orchestras throughout the United States, including the Pacific Symphony and the orchestras of Austin, Charlotte, Omaha, Phoenix, Rochester, San Antonio, San Jose, Seattle, Utah, and the Long Island Philharmonic. Worldwide engagements include the Auckland Philharmonia/New Zealand, BBC Scottish Symphony/Glasgow, Odense Symphony Orchestra/Denmark, Quebec Symphony/Canada, the RTVE Symphony Orchestra/Madrid, and the Tampere Philharmonic/Finland. He is also a frequent guest conductor in Brazil, Mexico, Puerto Rico, Spain, and Venezuela, as well as throughout Japan and Scandinavia.

Besides positioning the Minas Gerais Philharmonic as a leading organization in Brazil, Fabio Mechetti has successfully developed a recording partnership with Naxos. Recent projects feature works by Heitor Villa-Lobos. The orchestra also appeared in Costa Rica during the 2016/2017 season, and recently completed a tour of Argentina, Chile, and Uruguay.

An experienced opera conductor, Mr. Mechetti made his American debut with the Washington (D.C.) Opera, served as music director of the Rio de Janeiro Opera, and directed productions in Syracuse, Spokane, and Brazil. He also led thirteen fully-staged operas during his tenure with the Jacksonville Symphony.

Winner of the 1989 Malko International Conducting Competition in Denmark, Fabio Mechetti has been associate conductor of the National Symphony Orchestra/Washington, D.C. and resident conductor of the San Diego Symphony. His children’s programs in Washington won the 1985 National Endowment for the Arts Award for Best Educational Programming in the United States.

Mr. Mechetti holds a Master of Music degree in both conducting and composition from The Juilliard School. He currently resides in Jacksonville, Florida, with his wife, pianist Aida Ribeira, and their twin daughters.