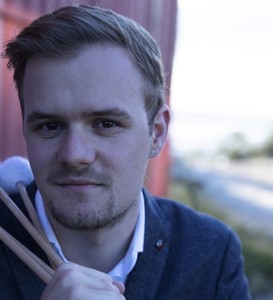 “Fabian Ziegler takes on the challenging program with technical mastery in music-making that is as rhythmically delicate as it is virtuosic..."

Percussionist Fabian Ziegler is an uncommonly talented young musician. Judging from his copious prizes and awards, word is already out that he brings something special to those who hear him. Last season included debuts with the Argovia Philharmonic, the Orchester Musikkollegium Winterthur, and the Tonhalle Orchester Zürich.

In his rapidly growing career, Mr. Ziegler has already achieved a goal by the commissioning of significant new repertoire for percussion. Reflecting this commitment, he often performs highly innovative compositions by renowned composers, such as John Psathas, Avner Dorman, Serj Tankian, Arash Safaian, and Daniel Schnyder. These works add an entirely new spectrum to the existing repertoire.

Mr. Ziegler has further extended his passion through his work on original and striking projects with composers around the globe. His 2021/2022 season will highlight collaborations with the Christchurch Symphony, Musikkollegium Winterthur, Orchestra Wellington, and the Zürcher Singakademie, among numerous others.

Recently distinguished as “young artist” at the renowned Davos Festival, Fabian Ziegler impressed both audiences and press with works by artists spanning from Steve Reich to Astor Piazolla. For the cross-genre project Digital Symphony at the famous Prinzregenten-Theater in Munich, he also provided the shimmering, crystalline vibraphone sound in überbach by Arash Safaian, alongside pianist Sebastian Knauer and the Zürich Chamber Orchestra. Mr. Ziegler has appeared in other important venues such as the Konzerthaus Berlin, KKL Lucerne, Kulturcasino Bern, the Tonhalle in St. Gallen, and at Lincoln Center in New York. In 2017, he also performed with Martin Grubinger’s Percussive Planet Ensemble.

With repertoire ranging from Bach to Corigliano to Eötvös and beyond, Mr. Ziegler frequently takes part in world premieres by renowned composers, including Christos Hatzis’s Tongues of Fire (percussion concerto in 2017) and Emmanuel Séjourné’s Double Concerto for Vibraphone, Marimba and Wind Orchestra (2016). In addition to performance, Mr. Ziegler is committed to expanding the percussion repertoire by commissioning new works by composers John Psathas, Avner Dorman, and Arkadiusz Katny. Since September 2015, he has been welcoming international guests from the world of percussion to his home city of Zürich.

With his characteristic energy and imagination, Mr. Ziegler has also founded his own concert series called “Marimba Concerts.” Always inquisitive and open minded, he lacks any inhibition or reservation. This applies not only to the repertoire he cultivates, but also to concert formats. In 2018, he added the “Swiss Percussion Night” format to his concert series.

A native of Switzerland, Fabian Ziegler completed his Bachelor of Arts in Music at Zürich University of the Arts under the primary mentorships of Martin Grubinger, Klaus Schwärzler, Raphael Christen, and Rainer Seegers. He completed a Master of Arts in Music (Performance Soloist) in September 2017, as well as participated in international masterclasses given by Katarzyna Mycka, Jean Geoffroy, Svet Stoyanov, Conrado Moya, and Beverly Johnston.

During the Instrumental Music Competition (Migros Kulturprozent) in both 2015 and 2017, Mr. Ziegler won the study prize for his extraordinary solo performance. Since 2017, he has held scholarships from the Rahn Kulturfonds and the Friedl-Wald Foundation.