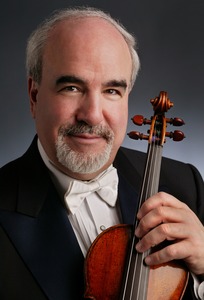 One of today’s most illustrious violinists, Glenn Dicterow is well known to audiences throughout Europe and North America, both as an orchestral soloist and a recitalist.  He appears frequently throughout Europe, the United States, Canada, Mexico, South America, Japan, Korea, and China, with orchestras such as the Baltimore Symphony, Birmingham Symphony, Grand Rapids Symphony, Hong Kong Philharmonic, Indianapolis Symphony, Kansas City Symphony, Leipzig Gewandhaus Orchestra, London Symphony, Los Angeles Philharmonic, Mexico City Symphony, Montreal Symphony, National Symphony, New York Philharmonic, Omaha Symphony, San Diego Symphony, San Francisco Symphony, and the Shanghai Philharmonic, to name a few.  Upcoming chamber music highlights include the California Institute of Chamber Music and the Chamber Music Society of Fort Worth, as well as being the featured leader of the New Century Chamber Orchestra in San Francisco.  Concerto engagements include a residency at the Texas Music Festival and a performance with the University of Southern California Symphony at Disney Hall in Los Angeles.

Mr. Dicterow was the celebrated Concertmaster and featured soloist of the New York Philharmonic for thirty-four years.  At the end of the 2013/2014 season, he retired and returned to California to take up a new position at the University of Southern California’s Thornton School of Music, where he has recently been appointed the first person to hold the Robert Mann Endowed Chair in Violin and Chamber Music.  A newly established position, it honors the life and work of the founder of the Juilliard String Quartet.

Glenn Dicterow’s discography includes Copland’s Violin Sonata, Largo, and Piano Trio; Ives’s Sonatas nos. 2 and 4; and Korngold’s Piano Trio and Violin Sonata, all for EMI.  Other recordings include Lee Holdridge’s Violin Concerto with the London Symphony, Shostakovitch’s Violin Concerto No. 1 with the New York Philharmonic on a Radiothon recording, and the Philharmonic’s two recordings of Rimsky-Korsakov’s Scheherazade with Yuri Temirkanov on the BMG label and with Kurt Masur on the Teldec label.

His most recent CD is a solo recital for Cala Records featuring Corigliano’s Sonata for Violin and Piano, Korngold’s Much ado About Nothing, the premiere recording of Leonard Bernstein’s Sonata and Martinu’s Three Madrigals for Violin and Viola.

An active teacher, Mr. Dicterow serves on the faculties of The Juilliard School and the Manhattan School of Music.  He and his wife, violist Karen Dreyfus, are founding members of The Lyric Piano Quartet, recently in residence at Queens College, and the Amerigo Trio.  He is also a founding member of the Dicterow-DeMaine-Biegel Piano Trio, which was recently formed in 2013 with esteemed colleagues Robert DeMaine and Jeffrey Biegel.

A top prizewinner in many international competitions, Glenn Dicterow is a graduate of The Juilliard School, where he was a student of Ivan Galamian.  Other teachers include Jascha Heifetz, Henryk Szerying, Manuel Compinsky, Eudice Shapiro, and Naoum Blinder.