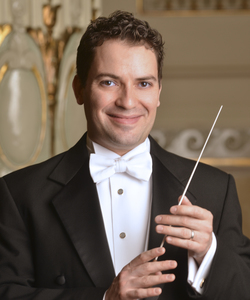 "Franco was meticulous about shaping musical phrases for optimal impact, and the orchestra responded with irresistible flair....This celebration of all things Viennese can easily trip up a conductor, but Franco was up to the challenge, particularly in the way he handled the work's many difficult transitions [Richard Strauss: Suite from Der Rosenkavalier]."

Beginning his fourth season as Music Director of Tulsa’s Signature Symphony and Associate Conductor of the Pittsburgh Symphony, Andrés Franco continues to delight audiences with his imaginative programming and energetic style. Highlights of the 2018/2019 season include debuts with the Dallas Symphony, Omaha Symphony, and Wheeling Symphony, as well as a return engagement with the Detroit Symphony.

A frequent guest conductor in the U.S., Europe, and South America, Mr. Franco has appeared with  the symphonies of Columbus, Fort Worth, Houston, Indianapolis, and St. Louis; the philharmonic orchestras of Boise and Oklahoma City; and the Chicago Sinfonietta. Worldwide, he has conducted the Orquesta Sinfónica de Castilla y León/Spain, the Orquesta Sinaloa de las Artes/Mexico, the National Symphony Orchestra of Peru, as well as the Orquesta Sinfónica Nacional, Bogotá Philharmonic, Medellin Philharmonic, and EAFIT Symphony Orchestra in Colombia. He has also appeared at the Cabrillo, Grant Park, OK Mozart, Oregon Bach, and Texas Music festivals.

A native of Colombia, Andrés Franco is dedicated to preserving and performing the music of the Americas. As Principal Conductor of Caminos del Inka, he has led many performances of works by Latin American composers, such as Jimmy López, Diego Luzuriaga, and the famous Argentine composer, Astor Piazzolla.

Mr. Franco formerly served as Music Director of the Philharmonia of Kansas City (2004-2010); as Associate and Resident Conductor of the Fort Worth Symphony (2009-2014); and as Leonard Slatkin’s Assistant Conductor during the 14th Van Cliburn International Piano Competition (2013).

He is married to Victoria Luperi, associate principal clarinetist of the Pittsburgh Symphony Orchestra.