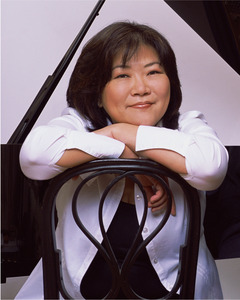 “Angela Cheng is quite simply one of the best Mozart concerto players around: her sound is invariably transparent and marked by delicacy of feeling. That it always carries, even in a large hall like the Orpheum, is a bit of inexplicable magic.”.

Consistently praised for her brilliant technique, tonal beauty, and superb musicianship, Canadian pianist Angela Cheng is one of her country’s national treasures. In addition to regular guest appearances with virtually every orchestra in Canada, she has performed with the symphonies of Saint Louis, Houston, Indianapolis, Colorado, Utah, San Diego and Jacksonville, as well as the philharmonic orchestras of Buffalo, Louisiana, London, Israel and Minas Gerais/Brazil.

In the 2020/2021 season, Ms. Cheng will perform with the Rhode Island Philharmonic and appear as a featured guest artist with Portugal’s Oeiras International Piano Festival. As part of the Zukerman Trio, she will tour Europe and Asia, as well as appearing at the Ravinia Festival, Aspen Music Festival, Detroit Chamber Music, and many other venues in the U.S. and abroad.

Angela Cheng’s collaborations with Pinchas Zukerman began in 2009, when, at his invitation, she toured both Europe and China as Mr. Zukerman’s collaborative pianist and a member of the Zukerman Chamber Players. She joined them again in the spring of 2010 for a U.S. tour, which included concerts at Kennedy Center in Washington, D.C. and the 92nd Street Y in New York. Subsequent seasons have seen multiple tours of Europe and South America, including performances at the Salzburg Festival, the Musikverein in Vienna, the Concertgebouw in Amsterdam, and at the Schleswig-Holstein and Ravinia festivals. As a member of the Zukerman Trio, along with cellist Amanda Forsyth, she made her debuts at the Verbier, Edinburgh, Miyazaki, St. Petersburg/Stars of the White Nights, and Enescu/Romania Festivals.

In the 19/20 season, Ms. Cheng was scheduled to serve as an Artistic Partner of the Edmonton Symphony Orchestra, performing three concertos throughout that season: de Falla’s Nights in the Gardens of Spain, Clara Schumann’s Concerto, in celebration of the 200th anniversary of the composer’s birth, and Mozart’s Piano Concerto No. 23. In addition to the Vancouver Recital Society, other highlights include return engagements with the symphonies of Vancouver, Victoria, and Symphony Nova Scotia, where she was scheduled to perform the Clara Schumann Concerto. In the U.S., Ms. Cheng was to perform with the symphonies of Richmond, Canton, Fort Worth, and Oklahoma City, as well as the IRIS Chamber Orchestra for the Beethoven Triple Concerto with the Zukerman Trio.  The Trio was also scheduled for extensive touring, including two European tours.

Ms. Cheng's debut recording of two Mozart concerti with Mario Bernardi and the CBC Vancouver Orchestra received glowing reviews. Other CDs include Clara Schumann's Concerto in A Minor with JoAnn Falletta and the Women's Philharmonic for Koch International; for CBC Records, four Spanish concerti with Hans Graf and the Calgary Philharmonic; both Shostakovich concerti with Mario Bernardi and the CBC Radio Orchestra; and a solo disc of selected works of Clara and Robert Schumann. Most recently, an all-Chopin recital CD was released by Universal Music Canada.

Angela Cheng was Gold Medalist of the Arthur Rubinstein International Piano Masters Competition, as well as the first Canadian to win the prestigious Montreal International Piano Competition. Other awards include the Canada Council’s coveted Career Development Grant and the Medal of Excellence for outstanding interpretations of Mozart from the Mozarteum in Salzburg.